What if Leafpool had never returned to the clans?

This What If? was asked by Corrie.S.P. for Warriors Wednesday.

Story is by me. 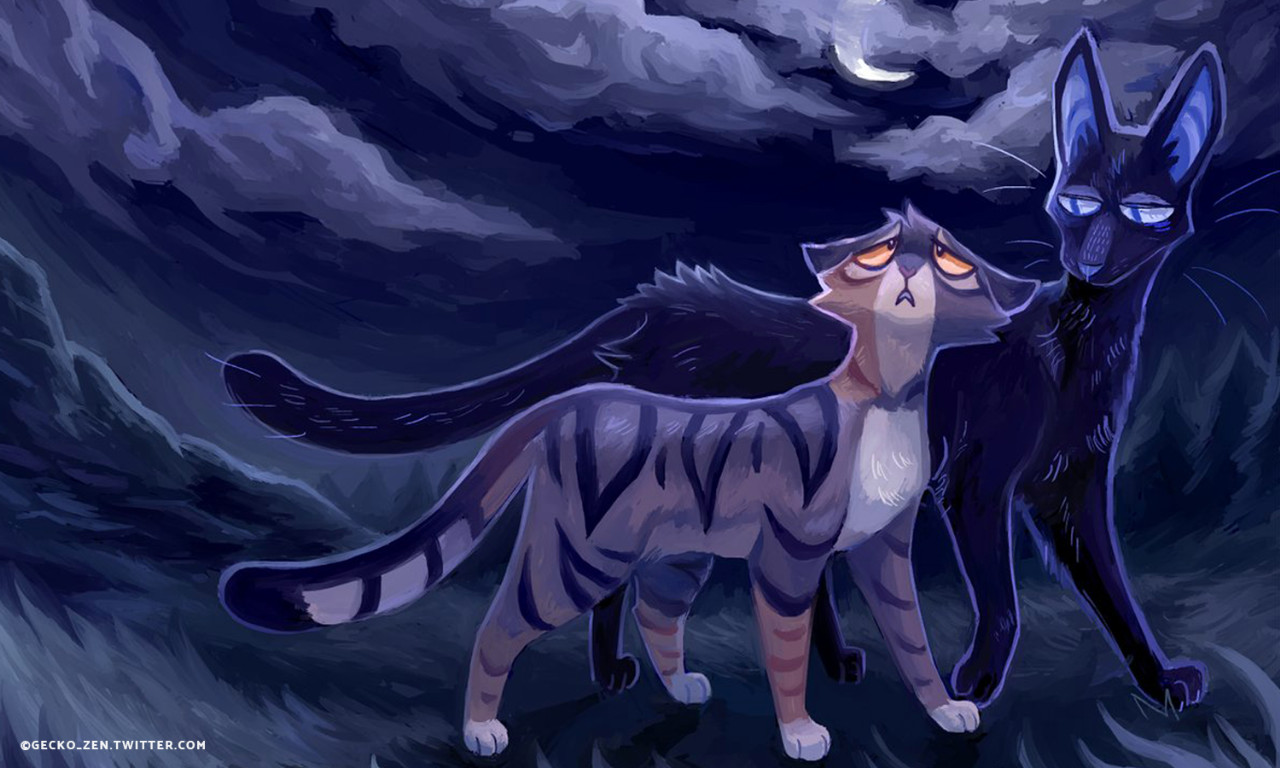 “We should rest for the night.” She meowed.

Crowfeather nodded and they settled down.

“I don’t know how you survive this cold weather on the moor. And you sleep outside!” Leafpool meowed with a shiver.

“My clan is used to it.” Crowfeather answered.

Suddenly, a badger came into view. It lumbered over on massive paws. Crowfeather greeted the badger with a dip of his head.

“Clans in danger. Kin will come, attack camp for revenge when homes were attacked.” The badger said. “You must warn clan.”

“Midnight, do you mean badgers are going to attack?” Crowfeather asked.

Crowfeather shook his head. “You have to choose, it’s your clan.”

“WindClan could help them.” Crowfeather suggested.

“I will ask clan for help.” Midnight said and she lumbered off.

“Are you sure we shouldn’t help?” Crowfeather asked.

Three days had passed. Leafpool saw Crowfeather walking over with a rabbit in his jaws. Leafpool greeted him with a purr. Crowfeather placed the rabbit on the soft ground. He sat down to eat and he and Leafpool shared the meal. Dawn passed. Leafpool heard big paws lumbering towards her and Crowfeather, and Midnight came into view. Leafpool hurried towards Midnight. She needed to know if her clan was okay.

“How was it?” Leafpool asked.

“Cinderpelt! No!” Leafpool yowled. “I left ThunderClan without a medicine cat!”

“Now the new medicine cat will have to train with StarClan.” Leafpool meowed.

But, we can’t go back. They won’t accept anymore after what I have done. Leafpool thought.

“Thank you for helping them Midnight.” Leafpool meowed.

“You’re welcome.” Midnight said with a dip of her head and walked off.

“Leafpool,” Crowfeather meowed after Midnight had left. “We can’t stay here, this isn’t a safe place to live.”

“Where should we go?” Leafpool questioned.

“We could go to the tribe of Rushing Water if you really don’t want to go back to our clans.” Crowfeather meowed.

Leafpool nodded, that seemed like the best place to go.

Leafpool shivered in the cold as they walked. They were getting closer to the mountains and it was getting colder.

Leafpool looked at Crowfeather. “You’ve been here more than I have, are you sure this is the right way?”

A moon had passed. Leafpool hoped they were close to the Tribe Of Rushing Water. Leafpool stepped to the right and felt her paw hit the air. She looked down and saw they were on a cliff. Leafpool tried to jump back but lost balance and started to fall. She felt someone grab her scruff. Leafpool looked to see that Crowfeather had grabbed her. As Crowfeather tried to pull Leafpool up she could hear claws scraping on the hard stone. Leafpool felt Crowfeather grip harder on her scruff and Leafpool winced. Then, she felt herself being pulled up and saw a lithe brown she-cat with grey eyes pulling Crowfeather. Leafpool felt her paws touch the hard sliver stone and she sighed with relief. A large long haired dark grey tom with amber eyes stood beside the brown she-cat.

“Thank you for saving me.” Leafpool meowed.

Crowfeather huffed and under his breath he muttered “I helped too.”

“What brings you to the mountains?” Stormfur asked.

“Why don’t we wait until you guys have eaten something? You look hungry.” Stormfur meowed.

“That would be great.” Leafpool meowed.

“Here we are.” Stormfur meowed. “Brook, could you fetch them some food?” He asked the brown she-cat.

“Sure!” Brook meowed and went off to grab an eagle.

“You two can share.” Brook meowed after she dropped an eagle in front of Crowfeather and Leafpool.

“I have to tell Stoneteller you are here.” Stormfur meowed and hurried towards Stoneteller’s den.

Leafpool nodded and started to eat the eagle.

A small kit came over. “Why are you eating?” The kit asked. “We already ate today.”

“They just got here and haven’t eaten yet.” Brook responded and shooed the kit away.

Then Leafpool saw Stormfur emerge from Stoneteller’s den with Stoneteller beside him. Stoneteller was a dark brown tom with patchy fur and amber eyes. He eyed them suspiciously.

“And we have all day to hear it.” Stoneteller meowed.

Crowfeather sighed and told the story of how he and Leafpool had left the clans, badger had attacked ThunderClan and all the rest.

“Why wouldn’t you help ThunderClan?” Stormfur asked, Leafpool assumed he was worried, as his father, Greystripe lived in ThunderClan.

“We couldn’t, they wouldn’t have wanted our help, we betrayed them.” Leafpool answered.

“You left them without a medicine cat!” Stormfur hissed. “Of course they would have wanted your help.”

Stormfur looked at his paws. “Is Greystripe okay?” He asked.

“I don’t know, he’s not dead though.” Leafpool responded.

“So, you wish for us to give you refuge here?” Stoneteller meowed.

“I can give you refudge, but not forever.” Stoneteller meowed. “Crag can show you where you will sleep.”

Crowfeather nodded, and Crag, a dark stone-grey tom, walked over.

Leafpool slept, her dreams were full of the scent of badgers and the blood of her former clanmates. She woke up with a start and looked around. Only Crowfeather was beside her. Leafpool shook her head to clear it and woke Crowfeather.

“What about?” Crowfeather asked sleepily, his eyes adjusting to the light.

“How long we want to stay here.” Leafpool answered.

“Well,” Crowfeather meowed, stretching. “Where do you suppose we will go after this? You don’t want to go back to the clans do you?”

“I do, but we can’t.” Leafpool meowed. “Should we ask to join the Tribe Of Rushing Water?”

“We could, but would that be easy? Stoneteller still isn’t that fond of Stormfur.” Crowfeather responded.

“I think we should.” Leafpool meowed.

“Alright, but you’re the one asking.” Crowfeather meowed with a yawn.

“Alright.” Leafpool meowed. She walked out of the den with Crowfeather behind her. Leafpool turned towards Crag, who was guarding the cave.

Crag walked into Stoneteller’s den and soon came back out with Stoneteller behind him.

“So, what do you want from me?” Stoneteller asked.

“We…would like to join the Tribe Of Rushing Water.” Leafpool answered.

Stoneteller’s eyes narrowed. “So you want to join us? Will you be loyal to our ways? You can no longer follow your clan code and ways if you wish to join.”

“I do want to join. We can be loyal to your ways.” Leafpool meowed. She looked at Crowfeather, he looked unsure.

“Fine then, you can stay for two moons, once those have passed, and you have learned the ways of our tribe, you may potentially join.” Stoneteller meowed.

“But, which roles are you willing to do? Prey-hunter or Cave guard?” Stoneteller asked.

“Uh, can I think about it?” Leafpool meowed.

Crowfeather’s tail flicked impatiently, he was sitting near the entrance to the Cave Of Rushing Water, waiting for the rest of the cats to join him so they could go hunting. Soon all of the cats had appeared. Including a grey and white she-cat named Wing Shadow Over Water and Stormfur.

As Crowfeather had decided to go hunting in the first place, he was leading the hunting patrol. Crowfeather ran ahead, Stormfur and Wing behind him. They passed Feathertail’s grave.

“Alright,” Crowfeather meowed to Stormfur and Wing. “Do you guys smell anything?”

“Eagle!” Stormfur meowed. Crowfeather could smell it too. He saw the eagle circling a mouse.

“Hide!” Crowfeather hissed. The cats raced under a bush. The eagle swooped down at a mouse and killed it. The eagle started feasting on its prey and turned it’s back to the cats.

“Now.” Crowfeather meowed, and the cats lunged at the eagle.

“Great job guys.” Crowfeather meowed. “You guys can head back without me.”

The two other cats nodded and Crowfeather walked off, towards Feathertail’s grave.

Mothwing is again said to have blue eyes.

Daisy is mistakenly said to have gray-and-white fur.

Ferncloud is mentioned to have been appointed for a hunting patrol, when in fact it was Sandstorm who was appointed to the patrol.

Firestar is mistakenly said to have seven lives left when he only has five.

Leafpool comments on the day of the quarter moon that the medicine cats will be meeting at the Moonpool that night. However, medicine cats meet on the half moon, and in the next chapter Brambleclaw remembers that Leafpool had just paid her half-moon visit to Moonpool.

I love cats and Warrior cats, I've read most of the books and I am waiting for the newest Warriors book to come out. I have a cat and a dog. I love reading and drawing(Mainly cats). I live in Canada. View more posts

Light Bulbs From My Mind

-from mind to screen-

The box of Wonder!

A li'l bit everything!

Me and Bertie, my dog! Everyone is welcome here! ❤️

sharing positivity one doodle at a time! 💕

Day in and out with Gelina!

Do you wanna check out the CrAzYNesS of my life?